Skip to content
Underwater Photography with the Canon 5DsR

Many underwater photographers have been anticipating getting their hands on the new Canon 5DsR, especially given it has the same ergonomics as the 5D MK III. Miles recently returned from a Trip to Sulawesi, Bunaken, & Lembeh in Indonesia exploring the capabilities of this new Canon 5DsR. The goal was to understand if this high megapixel beast has what it takes to make current Canon users fall in love with them all over again or if like many people, they might start the migration over to Sony (as long as Sony’s road map of lenses holds true)

My first impressions – The camera does not perform as well in low light and I have found that I have to stop down the camera 2/3 – 1 stop relative to the Canon 5D MKIII, but obviously underwater this is not a huge issue with the right lighting.  You do tend to find a slight increase in the noise especially in the dark areas. Additionally the camera is less forgiving when it comes to imperfections in focus. There were a number of shots that I believe I had nailed but when I got to the surface they were slightly off. The flip side is when you nail the focus the results are absolutely breathtaking and still gives you some room to crop when needed if you cannot get as close to the subject as you would like. The other small thing I noticed is if you decided to shoot Auto WB then it seems to less consistent than my Canon 5D MK II shooting slightly cooler and warmer at times. Nothing a few tweaks in Lightroom couldn’t solve.

Another noticeable area affected is diffraction. If you are unfamiliar with diffraction you can find a great article at Fstoppers.With most camera body lenses combinations you need to figure out where the sweet spot is. When shooting super macro in order to get the whole subject in focus you can often be f22-f40 but then the image gets soft. I found with my MKIII depending on the situation I could generally get to f25 without it getting intolerable. With the 5DsR I actually found that at f11 the images started to get a little soft. The actual listed DLA (Diffraction Limited Aperture) is 6.7 vs 10.1 on the 5DMKIII. DLA value is the result of a mathematical formula that approximates the aperture where diffraction begins to visibly negatively affect image sharpness at the pixel level.   See image below which shows full shot and 1:1 crops – Remember in Macro photography 1:1 means creating an image in which the subject is shown on the digital sensor in its actual size. That means it has a magnification ratio of 1:1, and if you printed an image the same size as your digital sensor 36mm x 24mm for a full frame DSLR the subject would appear life-size (remember 4/3 sensors are 18 x 13.5mm and other formats vary in size.)  For more on sensor sizes here is a great wiki article. 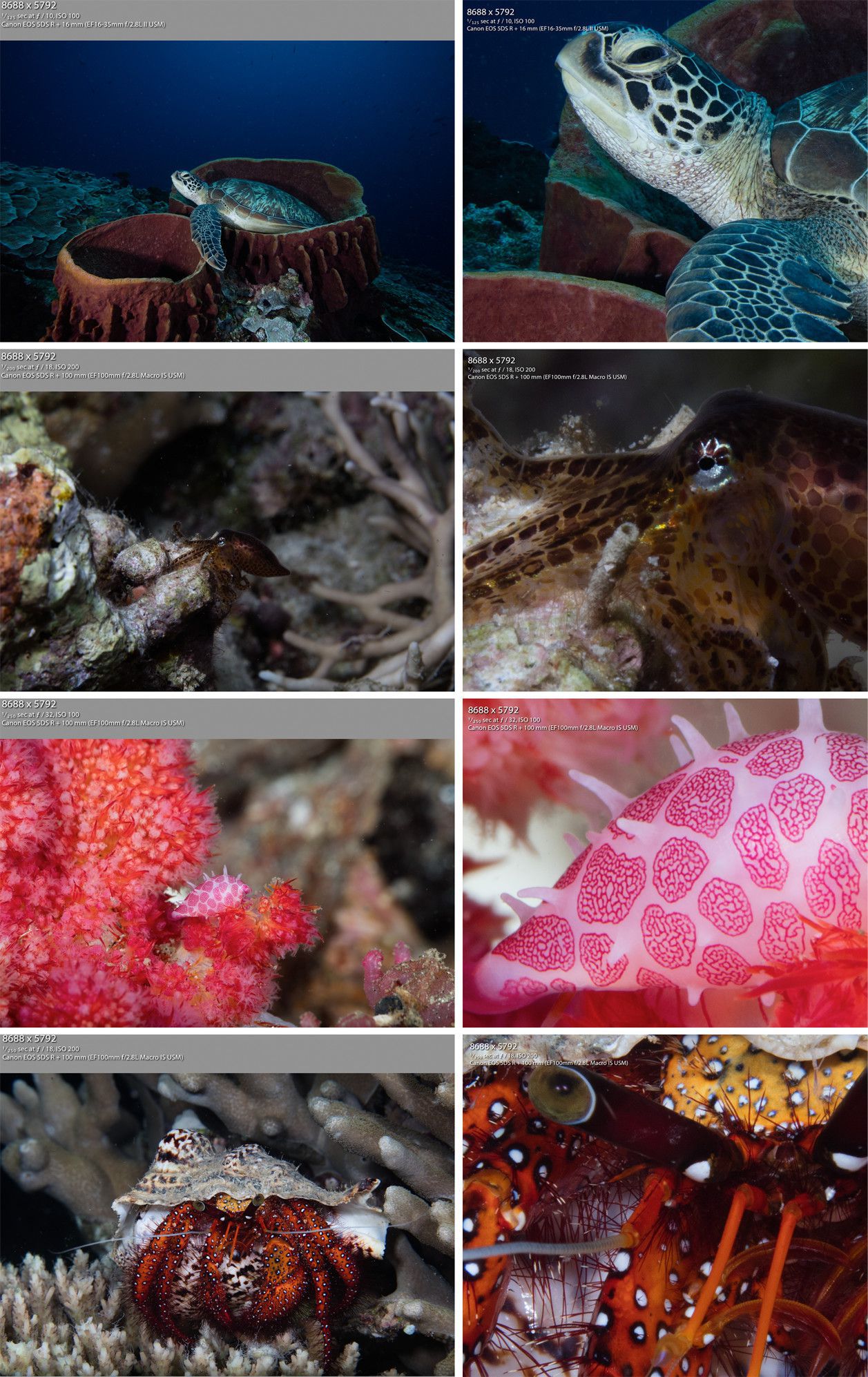 One nice feature was the video tracking that you could set up. 100mm Macro is generally not the best lens for shooting macro video (the Canon 60mm is much better and requires at least 2 x 2500 lumen video lights and a tripod) for decent footage. But my 100mm lens did a decent job on small moving objects (given my narrow working field) – this feature is similar to the tracking on the Canon 7D MK II cameras.

I think the biggest thing is that people are worried about the resolving power of canon lenses. Many reports are only lenses released in recent years will actually provide the results you are looking for. Ideally the Canon 100mm Macro, 11-24mm, and longer land prime lenses like the 300 – 600 MKII’s are getting good results. Also reports from others are that the Sigma Art series lenses and Zeiss lenses are still pulling in fabulous photos.

The last and most obvious change is in workflow – The files are large 51 – 56MB in size each. Using my Macbook Pro which is less than a year old (16GB RAM & 1 TB SSD) struggled with rendering previews (even with allocating 40GB to my cache) in Adobe Lightroom CC (2015)

WHAT I TESTED WITH:

My set up is an aquatica 5D MKIII housing, 2x Sea & Sea Alpha 110 strobes, two focus lights, Nauticam Carbon Fiber float arms, Macromate Doubler, Canon 100mm Macro lens. Overall I am very happy with the lens. If it was something you wanted to use both above and below water then you may find you get better overall performance from your MK III unless you have a well-lit scene. Below are sample screen grabs of four images with 1:1 crop at different f stops – none are perfectly exposed in order to show camera limitations (the overall image was compressed for web) and important note – I shoot full manual (no auto with tweaking) using a port focusing knob.

Here is an example of a frogfish .jpg shot at f13, 100ISO  that shows the underwater photographic rendering power of the Canon 5dsR with a Canon 100mm Macro lens. Click on the image to show a full resolution (.jpg) 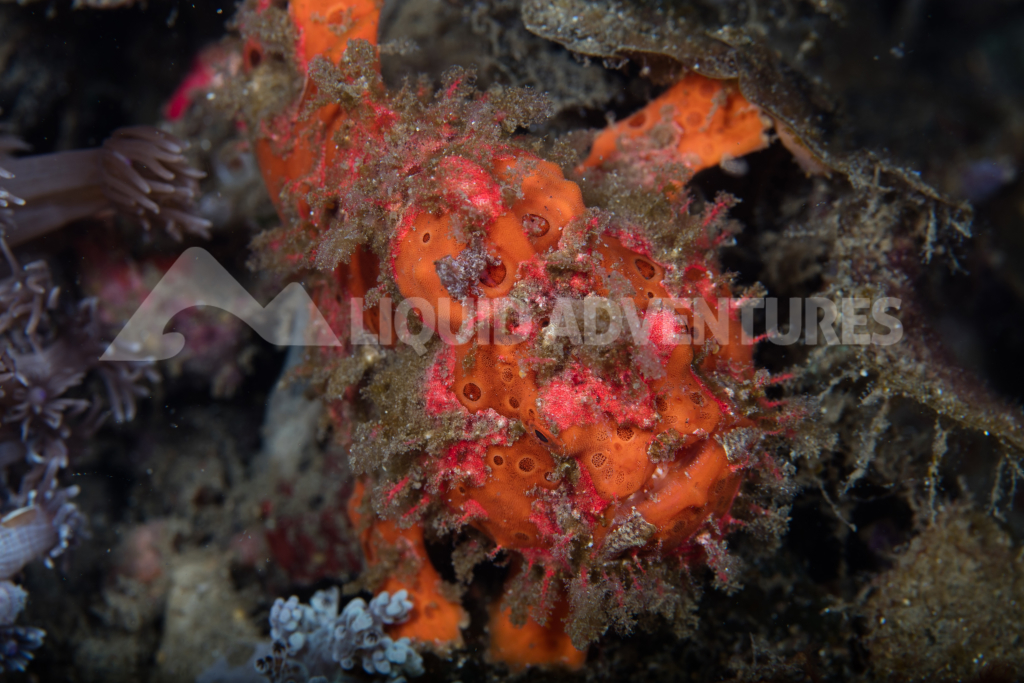